During an awards luncheon May 9 in Prattville, Fort Payne's Little Ridge Intermediate School was given very special recognition as a Council for Leaders in Alabama Schools (CLAS) “School of Distinction”, an honor that recognizes exemplary schools and programs that serve as outstanding educational models for other schools in the state.

CLAS recognized 30 "Schools of Distinction" across the eight State School Board districts and announced the 2021 CLAS Banner Schools.

The CLAS Banner School program was created in 2001 to recognize schools in Alabama that showcase outstanding programs and service to students.

Each school was nominated for this award by their superintendent with 166 school programs nominated statewide.

Superintendent Brian Jett congratulated the students and staff at Little Ridge Intermediate School "for this great accomplishment. Keeping kids motivated in an age of smart phones and social media can be a tough task for any teacher and school. I believe our robotics initiate at Little Ridge is making great strides for keeping our students engaged with advanced curriculum and activities."

The honored principals and superintendents are recognized and presented with a CLAS banner to display in their school signifying this distinguished honor.

Specifically, Fort Payne is one of four Alabama school systems in the running based on the achievements of the fifth grade STEAM Robotics Team. Wills Valley Elementary was previously selected in 2007 as a CLAS Banner School.

On March 5, the Fort Payne City Schools STEAM Robotics hosted students, parents and teachers when they held a dual robotics competition for the first time at Fort Payne High School. The event had 42 different teams present from around the nation. While competing, Fort Payne Middle School’s STEAM sixth grade Ultimate Current robotics team broke a school record by coming in third in the state robot game. Also, on the FPCS STEAM Robotics team is the rookie team from Little Ridge Intermediate School. The fifth-grade team, Fast Photons, were awarded with an overall win of third place in the state. They hosted a scrimmage before that on January 29.

“Winning the CLAS Banner School of Distinction for our fifth grade robotics team was a quite an honor. Our robotics teams across our district have worked exceptionally hard to be recognized across the State. Last years’ fifth grade team, Ultimate Current, qualified at the first-round and won the State championship and went on to compete in the Greece Invitational against a hundred teams from around the world. This year’s team, Fast Photon’s placed third in the State and received an invitation to the International Razorback Invitational in Arkansas on May 18-22. I am so very proud of our students and Ms. McClung, as their hard work and passion for STEAM programs have earned them recognition around the State and across the country.”

Regan McClung, who heads the program at the school, said she considers it "an honor to be a part of a dynamic school system that is forward-thinking. Our mission states that we prepare students to succeed in a challenging world tomorrow. According to the Bureau of Labor Statistics, the field of computer science is projected to grow by 21% through 2028, making it one of our fastest-growing professions in the global economy. Our students learn each day in robotics and computer science how to be creators of content, not just consumers, fulfilling our mission and inspiring our students to create their own futures!" 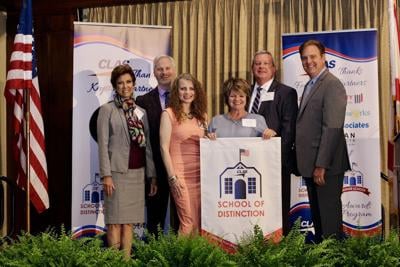